How much is the dash

How much is the dash? Dear Don Lee claims that 41 dashes equal 1 ounce (he does not specify, however, which exact ounce is meant). If you search the Internet, the difference will differ by an order of magnitude, from ⅛ teaspoon to 1 ml. Here, for example, 1 dash is 1/32 of an ounce. The question" how much is the dash?" arises constantly. The most liked answer is &quot;something in between.

How much is the dash? Dear Don Lee claims that 41 dashes equal 1 ounce (he does not specify, however, which exact ounce is meant). If you search the Internet, the difference will

​differ by an order of magnitude, from ⅛ teaspoon to 1 ml. Here, for example, 1 dash is 1/32 of an ounce. The question "how much is the dash?" arises constantly. The most liked answer is "something in between."

Wikipedia says the dash in the US is:

In other countries it's a slighter bigger amount, because of the fact that in the US 1 teaspoon is 4.93 ml, and in Australia, Britain and Canada 1 teaspoon is 5 ml.

But there is a nuance: a bar teaspoon was formerly an apothecary teaspoon, the measure of which equaled one liquid dram (drachm), or 60 drops.

Dr. Collins (1803). Practical rules for the management and medical treatment of Negro slaves in the sugar colonies. Printed by J. Barfield, for Vernor and Hood. P. 465.

One liquid dram is ⅛ liquid ounces, 3.6966911953125 ml for the USA and 3.5516328125 ml for the Imperial system. (For the particularly inquisitive minds: we certainly understand that for quite a long period of time the apothecaries' weight, a.k.a. medical weight, a.k.a. Nuremberg weight, was slightly different in all European countries, and for example an ounce ranged from 25 g in Venice to 35 g in the Habsburg Monarchy). Omitting the details of the 1824 reform, it is worth mentioning that the apothecary teaspoon began to undergo another change in the US in 1876: 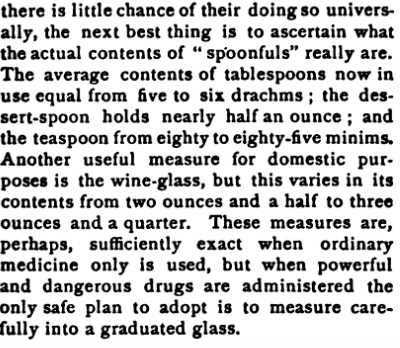 And gradually it comes to modern indicators: one teaspoon (tsp) in the US equals 1/6 liquid ounce, 1 1/3 liquid drams, or 80 minims.

But unfortunately, this does not help matters. If we consider that the rapid development of bar culture occurred in the mid-late 19th century in the United States, then we can not say that the authors of the first bar bibles adhered to one or another system. Not to forget that apparently at that time three systems of measurements could have been used: in addition to the pre-reform system and the Imperial system, which emerged after 1824, there is also the Pharmacy volume system, which takes a gallon as its basis, as well. But it is a wine gallon, which is equal to 3.785411784 liters. Moreover, this gallon is still used as a measure and is known as a liquid or wet gallon.

Unfortunately, it is difficult to find reliable references in order to check each publication which mentions the use of a measure of dash. But we are inclined to think that the bar teaspoon was different from the ordinary teaspoon. This opinion is shared - for example, in the Dictionary of Units of Measurement there are two teaspoons, as well:

The next question that may arise is: where did the dash come from?

Since ancient India and Egypt times, humanity used a binary system of measurements. They took a certain measure and divided it further into a power of two. Ideally (though we already know the story, how instead of ⅛ ounce a teaspoon has become ⅙ ounce), the chain looks like this:

Therefore, with a teaspoon equal to 3.7 ml, we get a reasonably accurate value of the dash: 0.4625 ml. Thus, in 1 American ounce there is about 64 dashes. This is our last message.

We will not even argue with The Angostura 1954 "Professional Mixing Guide" which specifies that 1 dash is ⅙ teaspoon or 1/48 ounce, or with Trader Vic, who claims that dash is ¼ American liquid ounce, i.e., 1 ½ teaspoon. Every man for himself decides, what a dash is.

P.S. We respect attempts to deduce a relative dash for purposes of standardization, but we do not see this as a systematic approach to studying this issue. Please see arguments one and two.